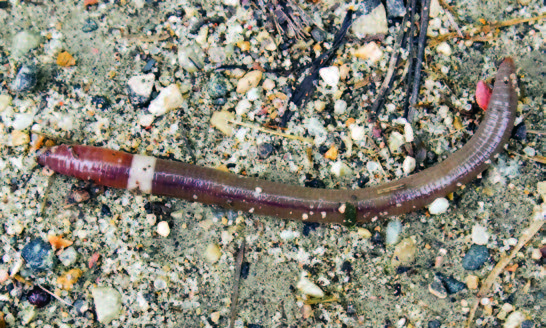 Amynthas species, invasive earthworms from temperate regions of Asia, were found in limited areas near the Visitor Center in fall 2013. Commonly called “jumping worms” or “crazy worms,” Amynthas have since been found elsewhere in Wisconsin, primarily in urban areas.

Jumping worms have been in the eastern U.S. for decades. They alter soil structure and chemistry dramatically, leaving a distinctive grainy soil full of worm castings (feces), and they can damage forest understory habitat. They are significantly more aggressive than European earthworm species. Their presence may facilitate spread of invasive plant species.

The worm can reproduce without mating during its active season. Populations grow rapidly, reaching peak abundance in late summer/early fall, and outcompete other species.

The Arboretum is facilitating much-needed research as well as public outreach and education. Staff are following DNR best management practices to limit spread of the worm.

Restricted Species
It is illegal to transport, transfer, or introduce Amynthas worms in Wisconsin without a permit. Do not buy or use jumping worms for composting, gardening, or bait. Jumping worms are restricted under Wisconsin DNR invasive species rule NR40.

All earthworms found today in Wisconsin’s glaciated regions are non-native.
•
Earthworms are especially harmful to forest ecosystems.
•
People spread earthworms—by using them for bait and compost, or by unknowingly transporting worms or cocoons on shoes, wheels, mulch, or transplanted plants.
•
Earthworms (e.g., bait) should not be discarded in or near natural areas—they should be put in the trash.
•
Earthworms have been valued in yards and gardens, but in large numbers they harm beneficial soil life and plant growth. Jumping worms cause even greater damage in natural and cultivated environments.

What Can You Do?
• Check your property for earthworms. A mustard pour is an easy way to sample for worms: www.nrri.umn.edu/worms/research/methods_worms.html

• Learn to recognize the soil signature.

• Be careful when sharing and moving plants—know where they came from and check for jumping worms. If you think you have them, don’t transplant mulch, soil, or plants. Cocoons are hard to see—err on the side of caution.

• Contain their spread—don’t buy or use jumping worms for composting or bait.

• If you suspect jumping worms, alert the DNR: Bernadette.Williams@wisconsin.gov

You can help document the presence of jumping worms—and contain their spread.
Here’s what to look for:
• Distinctive grainy soil full of worm castings
• Very active (hence the “jumper” nickname), moves like a snake
• Smooth, light-colored clitellum (the glandular band near the earthworm’s head; in other species it is raised and pink, or a color similar to the worm.)
• Can drop its tail if handled roughly

• Can extend range by 12 m / year
• Reproduce asexually (parthogenically)— and more rapidly than European species
• Mature in about 60 days
• Can grow up to 8 in. long, dep. on species
• Cocoons are approx. 2 mm in diameter and similar in color to dirt

We teach, learn, lead and serve, connecting people with the University of Wisconsin, and engaging with them in transforming lives and communities.

Connect with your County Extension Office »

Find an Extension employee in our staff directory »

Feedback, questions or accessibility issues: info@extension.wisc.edu | © 2023 The Board of Regents of the University of Wisconsin System
Privacy Policy | Non-Discrimination Policy & How to File a Complaint | Disability Accommodation Requests

An EEO/AA employer, University of Wisconsin-Madison Division of Extension provides equal opportunities in employment and programming, including Title VI, Title IX, the Americans with Disabilities Act (ADA) and Section 504 of the Rehabilitation Act requirements.