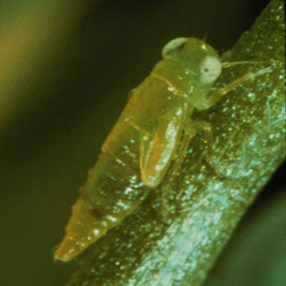 The recent warm weather has been favorable to potato leafhopper development.  Some late instar nymphs have been observed and this is the time populations may, or may not, get rolling.  Potato leafhoppers can go through 4-5 generations per summer and adult females can live and lay eggs for a relatively long period of time.

Bryan Jensen, UW-Madison Dept. of Entomology and Integrated Pest Management Program Coordinator has put the following information together to help growers best manage potato leafhoppers.  Just spraying without determining if numbers are high enough to justify controlling is not a good use of money.

Damage caused by potato leafhoppers is not reversible, however, control should not be considered preventative by nature.  With consistent scouting we can prepare and use rescue treatments before economic damage occurs.  I have seen lots of tools used to sweep leafhoppers including caps, ice cream pails, 5-gallon pails as well as observations on the cutter bar or pant legs.  Only a 15-inch diameter sweep net should be used to estimate populations and to determine if the economic threshold has been met or exceeded.  To get a representative estimate of field populations take 20 consecutive sweeps in each of 5 areas of the field (100 total sweeps).

Do not sweep field edges and expect populations to be similar within the field.  I wish it were that easy.  Pay very close attention to the edge of the net when counting.  Leafhopper nymphs are often found along the edge of the net.  Adults more commonly are found in the back of the net.  Early instar nymphs can be difficult to see and often yellowish in color.  Later instars and adults are fluorescent green.  Missing the nymphs on the edge of the net can mean the difference between accurate and poor field scouting.

When alfalfa is within 1 week of harvest, I would suggest taking an early cutting if that stand is otherwise considered healthy.  Cutting of established stands is an excellent cultural control method.  After harvest there isn’t a food source and adults will leave.  Nymphs are likely to die because of the lack of food and exposure.  Therefore, automatically spraying stubble after cutting is not a good control tactic.  We do not know exactly when (or if) adults will migrate back into that field at populations high enough to cause economic damage.  If they do, weekly field scouting will catch that migration back into the field and result in a better-timed insecticide application.

Direct seed alfalfa is a little different situation.  After first cut, there can be adequate green foliage on the stubble that both adults and nymphs may feed on.  If high populations existed prior to cutting sweep these field immediately after harvest.

On a side note, as you start scouting soybean for aphids you will undoubtedly find some potato leafhopper nymphs.  Usually the trichomes (small hairs) will help protect soybeans from economic feeding.  To give you a perspective of the economic threshold on soybean, populations of more than 2/plant on soybean less than V4 may benefit from an insecticide application.  R1-R3 soybean require approximately 3/sweep and soybean at R4 or older require 6-7/sweep.  These thresholds serve as a management guideline.  I would certainly consider growing conditions and crop health before deciding to treat.  Remember wheel tracks can slightly reduce yield and a well-meaning foliar application can flare aphid and/or two-spotted spider mite populations.

I am often asked when will leafhopper populations slow down.  Usually by mid-August populations are declining.  However, it is not common to find economic populations after Labor Day.  Occasionally, I have noticed a significant reduction after July 15.  However, mid-August is usually more common.

We teach, learn, lead and serve, connecting people with the University of Wisconsin, and engaging with them in transforming lives and communities.

Connect with your County Extension Office »

Find an Extension employee in our staff directory »

An EEO/AA employer, University of Wisconsin-Madison Division of Extension provides equal opportunities in employment and programming, including Title VI, Title IX, the Americans with Disabilities Act (ADA) and Section 504 of the Rehabilitation Act requirements.